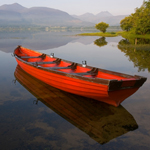 Two thousand years before the first Egyptian stone mason cut the first block for the first pyramid in the Valley of the Kings, the ancient Irish had erected what is now known as Newgrange, (thirty minutes north of Dublin).

It is universally accepted that the builders of New Grange, were both mathematical and Astronomical geniuses to have synchronised the suns rays to shine down the corridor of the main burial chamber on only one day in the year, The Winter Solstice, Dec 21st, the year’s shortest day.

Ireland, the only Celtic Nation State in the world has influenced the evolution of many countries, most notably the USA and Australia in the 18th and 19th centuries but also France, Germany, Switzerland, Italy, Spain, Chile and Argentina in earlier centuries.

The Irish being a Celtic people are consequently a romantic people, -It is said of them, that all their wars were merry and all their songs were sad. Fiercely independent, they bow to no earthly regent, only to the carpenter of Nazareth’s son, Joshua Ben Josef, Jesus!!