By Liana Falconer on February 11, 2015 in Luxury Private Chauffeur Tours

As I like to familiarise myself on a regular bases with all the very best places to visit and tour in Ireland not to mention the best hotels, restaurants and gastro pubs. My most recent tour took me to Kinsale in Co Cork. This historical town, in my opinion lived up to and exceeded my expectations in everyway. We stayed in a beautiful hotel in the centre of the town, called the Blue haven. www.bluehavenkinsale.com/

It was both comfortable and welcoming, warm and inviting, with live traditional Irish music playing in the bar, good food, friendly staff and a lovely atmosphere throughout.

Located some 25 km south of Cork City on the coast near the Old Head of Kinsale, it sits at the mouth of the River Bandon and has a population of 2,257 which increases substantially during the summer months when the tourist season is at its peak and when the boating fraternity arrive in large numbers. Kinsale has significant military history. In 1601, Kinsale was the site of a battle at the end of the Nine Years War in which English forces led by Charles Blount, 8th Baron Mountjoy defeated a rebel Irish force, led by the princes Hugh Roe O’Donnell and Hugh O’Neill, which was allied with forces of the Spanish empire of Philip III of Spain and Portugal.[8] Following this battle the Flight of the Earls occurred in which a number of the native Irish aristocrats, including the Earls of Tyrone and Tir Conaill, abandoned their lands and fled to mainland Europe. Shortly after the battle, James’s Fort was built to protect the harbour. Charles Fort, located at Summer Cove and dating from 1677 in the reign of Charles II, is a bastion-fort that guards the entrance to Kinsale harbour. It was built to protect the area and specifically the harbour from use by the French and Spanish in the event of a landing in Ireland. James’s Fort, which dates from the reign of James I, is located on the other side of the cove, on the Castlepark peninsula. An underwater chain used to be strung between the two forts across the harbour mouth during times of war to scuttle enemy shipping by ripping the bottoms out of incoming vessels Kinsale’s naval significance declined after the Royal Navy moved its victualling centre from Kinsale to Cork harbour in 1805 during the Napoleonic Wars in the period of France’s First Empire. When the RMS Lusitania was sunk by a U-boat of the German Empire on 7 May 1915 during the First World War, some of the bodies and survivors were brought to Kinsale and the subsequent inquest on the bodies recovered was held in the town’s courthouse.[9] A statue in the harbour commemorates the effort. Square in Cobh, to the east of Cork city. 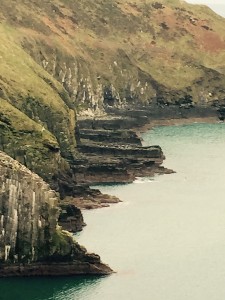 As both my partner and I love to hike we explored the Old head, with its spectacular scenery. All the pictures taken are by myself . The famous golf  links is situated here, where I can arrange a game of golf for my clients if they wish.  www.oldhead.com I would highly recommend  visiting this beautiful historical harbour town, with its colourful streets, wonderful bars and restaurants, including the fishing fishy café which is a favourite of mine. www.fishyfishy.ie and staying in the Blue haven hotel. www.bluehavenkinsale.com/