By Liana Falconer on November 29, 2016 in Chauffeur Tours Ireland

A country rich with history is sure to be rich with museums in its modern day. From a small museum that showcases every aspect of Michael Collins’ life, to archaeology and vikings, to 18th century farming . Here is a list of museums you must visit in Ireland, each intriguing for all ages.

Over the centuries, some 10 million people have left the island of Ireland. At EPIC you can step through 20 themed galleries to find out why people left, see how they influenced the world they found, and experience the connection between their descendants and Ireland today. Immerse yourself in the stories of some of the most remarkable tales of sacrifice, endurance, adventure, and discovery the world has ever known. EPIC brings these amazing stories to life in a unique and spectacular way.
I visited recently and found this  Museum to be very moving. 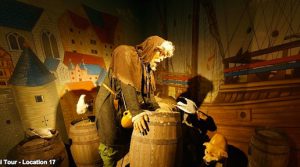 The Waterford Treasures contains three museums within short walking distance from each other in the Viking Triangle in Waterford, Ireland’s oldest city. The museums tell the 1100-year-old story of the city from its foundation in 914 by Viking sea pirates – the stone fortress of Reginald’s Tower houses the Viking Treasures, and the Bishop’s Palace is home to the treasures of the 18th, 19th and 20th centuries. As Ireland’s only medieval museum, it showcases all of the spectacular treasures from the Middle Ages. 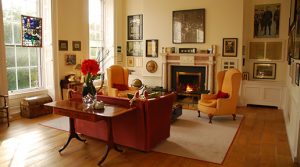 The Little Museum of Dublin

Located in Dublin’s Saint Stephen’s Green, the Little Museum is a hidden gem. It is located on the first floor of an 18th century Georgian townhouse, and captures the history of modern Dublin like no other. A civic museum (or ‘people’s museum’), it chronicles the history of the city in the 20th century. 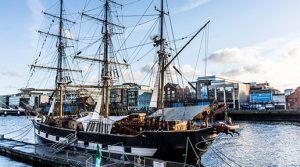 A true staple of Dublin’s River Liffey, this museum is one of the city’s most popular attractions. By day, it’s a living history museum of 19th century emigration – the ship made many voyages during the Great Hunger from Ireland to North America and Canada. It’s a beautiful ship and the tour is sure to fascinate and intrigue all ages, and you can hear all about the ship’s tribulations and why it was considered to be “lucky.” On the lower deck, there are life size wax statues modeled after the actual passengers who made the treacherous journey during the Great Hunger. 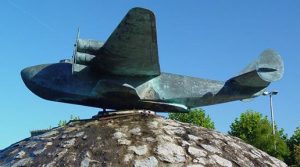 This museum, housed in the original terminal building in Foynes, Co. Limerick, recalls the nostalgic era in which Foynes was the center of the aviation world from 1937 – 1945. The story is told through a range of exciting exhibitions and graphic illustrations. There is also an authentic 1940s cinema, as well as a Radio and Weather room, complete with transmitters, receivers and authentic Morse code equipment. It also has the only full sized replica of the B314 flying boat.

The visitor center at the Mizen Head signal station (Ireland’s most southwesterly point) includes a dynamic new center, the keepers’ quarters below, and numerous enchanting surprises along the path and over the bridge. The original keepers’ rooms have been retained so visitors can recall the life of the men of Irish lights, and there are many fascinating displays and films to enjoy, as well as beautiful views of the south and west coasts. An award-winning maritime museum.

The Michael Collins Center is in Clonakilty, Co. Cork – owners Tim and Dolores Crowley have been interpreting the Big Fella’s life since 1997, and have organized in-depth tours and displays. The tour starts in their cottage/theater with a film exploring Collins’ childhood and schoolboy days. The guide then takes visitors through Collins’ life in the 1916 Rebellion with large slides, photos and film clips. The presentation ends with a guided tour of the ambush trail where he was shot – there is a life size replica of the Rolls Royce and Collins himself. 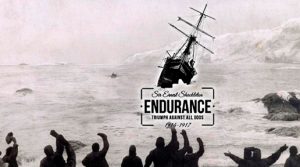 The exhibition in Dublin’s Dún Laoghaire tells a survival story like no other: Irish-born explorer Sir Ernest Shackleton’s Imperial Trans-Antarctic expedition of 1914-1917. On display are over 150 photographs taken by the Expedition photographer Frank Hurley, a full size exact replica of the James Caird, which is the lifeboat that proved critical to the rescue, and much more. You’ll be able to fully understand and relive this story of extraordinary leadership.

Time lapse video of Northern Lights in Donegal is the stuff of dreams.
Visiting Ireland: The Story behind the Irish flag