By Liana Falconer on October 4, 2022 in Chauffeur Tours Ireland

This is Dublin’s floral showcase, with more than 20,000 different plants, a Great Yew Walk, bog garden, water garden, rose garden, student garden, and herb garden.Established in 1795, the layout also includes a variety of Victorian-style glass houses built to house tropical plants and exotic flowers.  Situated on 50 acres of land just two miles north of the city center and easily reachable by Dublin Bus, the gardens also have over 300 endangered species from around the world, and six species already extinct in the wild. 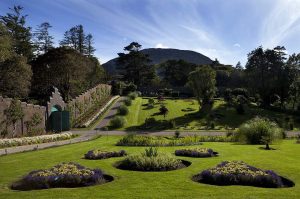 A six-acre walled Victorian garden. Singled out as a winner of a Europa Nosta Award in 2002, this serene lakeside sanctuary was originally laid out in 1867, and took three years to complete, transforming a wilderness of rock and bog into a feast of flowers and plants set in geometrically designed borders and beds, along with hundreds of thousands of trees. Unfortunately, the garden fell into disuse for over 100 years until its recent restoration.T

he garden is divided into two sections, a formal flower garden for leisurely strolls and the kitchen garden containing fruit, vegetables and herbs. In addition, the former Head Gardener’s House has been turned into a mini-museum as has the Garden Bothy (workman’s house). The Tool Shed is also on view and shows examples of tools used in the Victorian era and small treasures uncovered during the garden renovations. A shuttle bus connects the gardens to Kylemore Abbey.

An extraordinary array of 18th-century gardens just 12 miles south of Dublin City, with a backdrop of the Sugarloaf Mountain.  The floral layouts have Italian and Japanese themes, plus herbaceous borders, ornamental lakes, splendid statuary, and decorative ironwork. In addition, the grounds hold a pet cemetery, a wildlife park, and a waterfall (the highest in Britain and Ireland) which tumbles down from a 400-foot high cliff. The gardens surround a restored 18th-century house that also provides exhibits, shops and a café with an outdoor terrace overlooking the entire garden landscape. It’s an easy half-day trip from Dublin by bus or car.

A small garden paradise on a 37-acre island off the West Cork coast. Accessible by local ferry boats from the pier at Glengarriff, it is home to an Italian Garden of rare and tender tropical plants, not usually seen in Ireland or northern Europe. It was here that George Bernard Shaw is reputed to have written part of St. Joan. The paths around the gardens, ideal for strolling, include ponds and pedimented gateways, a Martello tower, and a Grecian temple overlooking the sea.
You can easily spend a morning or afternoon here. 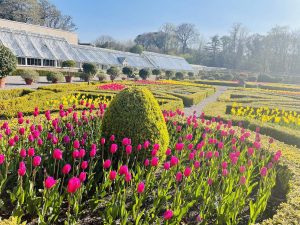 This 18th-century garden surrounds Muckross House, the focal point on the shoreline of Killarney’s Middle Lake. Often called “the jewel of Killarney,” the splendid 20-room Victorian mansion, built in 1843, provides a glimpse of the lifestyle of the landed gentry of Killarney in the 19th century. The well-manicured gardens outside are renowned worldwide for their collections of azalea, roses and rhododendron, as well as a sunken garden, rock garden, stream garden and walled garden.